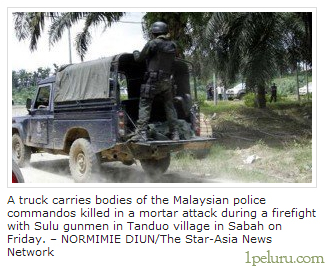 
MANILA: A Malaysian Opposition politician allied with Datuk Seri Anwar Ibrahim is believed to have met with the Sulu Sultan late last year and gave the Opposition’s support to the Kirams’ claim to Sabah, a Philippine intelligence source revealed.
In a special report by the Philippine Inquirer, the intelligence officer said that one member of the Malaysian political opposition allied with Anwar Ibrahim was running for a post in Sabah.
“Apparently, this politician was one of those who spoke with the Kirams. He supposedly gave the Opposition’s support to the Kirams’ claim to Sabah,” the source said.
The source also believed that in their meeting in November last year, the Kirams decided to “reclaim Sabah or at least ask for a compensation for Sabah that is commensurate to the land’s value today, and for the royal family to be given due recognition by Malaysia.”
According to the Philippine Inquirer, the intelligence sources consistently mentioned three groups that appear to have taken advantage of the decision of the Kirams to pursue their Sabah claim.
“These are groups that wanted to ride on the Kirams’ pursuit with their own interests in mind,” one of the sources said.
Another source added: “There are a lot who can gain from this, not just in the Philippines but in Malaysia as well.”
These “external factors,” as an Inquirer source described the groups, are one small faction that is in it for the money, an anti-Aquino administration group, and the Malaysian political Opposition.
“The Kirams planned to pursue their claim as early as last year. But they went to Lahad Datu also on the instigation of these groups,” the intelligence officer said.
The small group supposedly goaded the Kirams to ask Malaysia for a higher rent on Sabah. If Malaysia gives in, this small group would allegedly have a share of the increase.
The anti-administration group simply wants to discredit President Aquino and is using the peace process as a cause of disenchantment for the Kirams.
“All those who do not like P-Noy (the President’s nickname) have joined forces. This is one way to really test how this administration will react (to such an issue). Whatever happens in Malaysia, there will be a backlash on us,” one source said.
“In a way, whoever wants to disrupt the peace process or the gains of President Aquino has already won,” the source added.
The third group is allegedly the Malaysian political Opposition, which is gearing up for general elections that may be called before June.
Whether the heirs of the sultanate of Sulu acted on their own to reclaim Sabah or were instigated by an external force to do so, one thing is certain, according to government intelligence sources: It was a business that proved too big for the heirs to handle on their own, the Philippine Inquirer reported.
The sources said that the Philippine government’s policy on Sabah is to keep it in the back burner.
But apparently “some people” want to push it forward now. And why now, at this time, is one of the questions government intelligence is looking into.
It is being Tausug that is keeping Sultan Jamalul Kiram III, his family, and their subjects stubbornly pressing their renewed claim to Sabah, even to the extent of defying President Aquino, one of the Inquirer sources said.
“This is the last stand of Sultan Jamalul. Being Tausug, they already gave their word they would pursue their claim. This is now do or die for them just to keep their word of honour,” the source, a senior military officer, told the Inquirer.
The source said the Kirams decided to unite because they felt left out of the peace negotiations between the Aquino administration and the Moro Islamic Liberation Front, which signed a premilinary peace deal last October.
“The Kirams wanted to get the attention of the Philippine government,” the source said.
“For so many years, the family felt they have been exploited in politics. Sultan Jamalul was goaded to run for senator in 2010 but he lost. Then their letter to President Aquino (in 2010 before he assumed office) got lost,” the source said.
The source said the Kirams and their followers “conceived the details of the plan to go to Lahad Datu” in late January this year.
“In February, a small group of the Kirams’ followers left for Lahad Datu, followed by Raja Muda Agbimuddin,” the source said.
The estimated 70 firearms now in the hands of the group holed up in Tanduao are owned by residents in Lahad Datu, Tausug and Badjao holding Malaysian identification cards, the source said.
Malaysian security forces have encircled Agbimuddin’s group but are holding action, with the grace period for the group to leave having been extended three times and a fourth being requested by the Philippine government.
Malaysians careful
The Inquirer’s military source said the impasse continues because the Malaysians are extra careful in dealing with Agbimmudin’s group.
“They are all Muslims and they know that if there is violence, it would go on forever. There are 800,000 Filipinos in Sabah. It would be a huge problem in Sabah if violence erupts. The Malaysian security forces may end up dealing with guerrillas or a rido,” the source said, using a Muslim term for clan war. - http://newsinfo.inquirer.net

Anonymous said…
Kwn2, allow me a moment of indulgence to clear the foul stench of stupidity amongst the malaysians. Kes kat LD is nothing new to us sabahans, in the 90s they abruptly came to the shore at Semporna and immediately bombed the police stations, and went amuck at the town.

They are smart people, some left at the sea naik dr kwsn bakau and lived 4 6 mth b4 start to mingle with locals and married them. The tausugs in LD now didn't came all at once, instead they came in batches, with inside helping frm their family at the village. Trust me they have been there at least 2 3 mth b4 the group bcomes complete, then they decide its time to wage war. Klu tak paham rules of engagement, jgnlah menunjuk pandai ckp bukan2 kata kerajaan lemau, ada hati nak banding dgn Bersih.

Polis kene masuk dulu sbb dorg trained as negotiators, tentera is the last resort as they will not spare anyone once commanded. They need time to ensure all the locals are out of the village and then cut their food and finance sources, hoping the tausugs will surrender. That is our rules of engagement. We are not barbaric stoic like the american soldiers.

Those who went in and died today knew they might not come back alive, as that was their vow when inducted to the force. So please, belajar dr sejarah, nak blajar sejarah kene bnyk membaca, sbb tu org kita ramai jd mcm ni, mulut ngan otak tak sama frekuensi, bhs biadapnya bangang abadi. Fedup with their stupidity. Thank u for ur moment.
March 2, 2013 at 2:24 AM

Tok Merah said…
Cheah Yuen Bing, go back to China and don't ever come back to Malaysia. You're not fit to be a Malaysian Citizen. Never ever thank what the authorities have done so far to enable us to live in safety and harmony. All these while people like you always create an unstable situation. Trying to pull apart the good and harmonius situation we are in.
March 2, 2013 at 5:53 AM

Anonymous said…
Well said.. for those ungrateful ppl,pls think outside the box will ya KiDS..