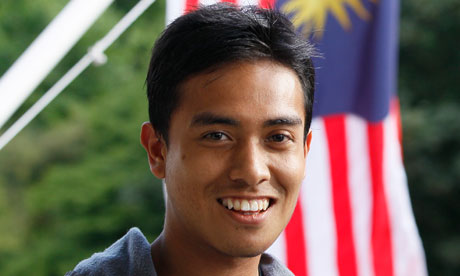 Ashraf Haziq, the Malaysian student mugged and left with a broken jaw in a now notorious attack in Barking, east London on Monday, said he still felt "great" about Britain.

The 20-year-old, who is studying accountancy and has only been in the country for a month, said he bore no malice or ill-feeling towards the country despite his ordeal which started when rioters demanded his bicycle.

Speaking at a press conference after being discharged from the RoyalLondon hospital, Haziq, from Kuala Lumpur, said he felt sorry for his attackers. "I was really sad for them because amongst them there were children," he said.

"There was a boy from a primary school, I think. It was shocking because I expected it to be someone older, but there was this boy."

The student was held up at knifepoint and punched. Several people were seen helping him to his feet and looked like they were comforting him but then they rifled through the contents of his backpack and stole items. He underwent a three-hour operation on Wednesday.

Minutes after his press conference at the Malaysian high commission in London, police said a 20-year-old man had been arrested on suspicion of robbery in connection with the attack.

Haziq said: "My family are worried about me, and my mother would like me to go home, but I am determined to stay. Britain is great. Before I came here, I was very eager and I haven't got any ill-feeling about what happened.

"It is really strange. I am just a normal person. These things happened so suddenly."

He had been told money was being raised through a social media campaign and he said he would like his mother to come to visit him.

"It is very nice of you to help me. I plan to finish my study here and then, after I finish, I am returning back home. That will be in two years' time."

Haziq said he appreciated David Cameron's support for him, expressed in the Commons on Thursday, but said he did not want to comment about the prime minister's description of a "sick society". He said had been helped by two girls and a woman following the incident.

Haziq had been on his way to a friend's home when he was attacked. "She told me there was a riot going on in East Ham and she wanted us to be together."

The Malaysian high commission has warned its citizens to "exercise maximum alert and vigilance while they are in public places, especially in areas affected by the riots". -GUARDIAN