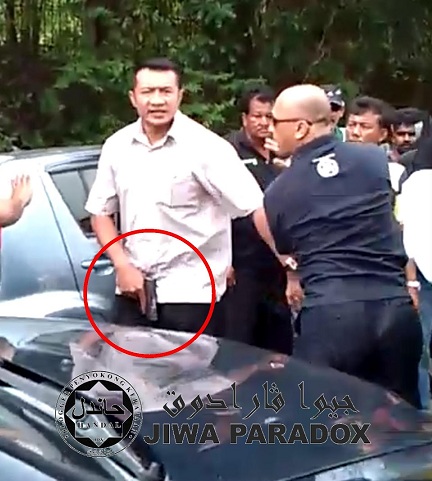 MALACCA: A blogger who had an automatic pistol pointed at his face by Opposition Leader Datuk Seri Anwar Ibrahim's bodyguard is still in trauma over the incident.

Shahridhan Shaharan said the bodyguard was so brazen and came up to him, although he was with a group of people in Kampung Baru Rim on Saturday.

He said he still shuddered whenever he thought about the incident as the bodyguard “looked very menacing, as if he really meant to pull the trigger”.

Shahridhan said he was among some people who were putting up banners along a road when a bus carrying Anwar and his party members on PKR's “Jelajah Merdeka Rakyat” roadshow passed by.

“We decided to trail the vehicle,” said the 29-year-old.

“However, a dark coloured car suddenly stopped in front of us. A man came out and immediately pointed the gun at my face and told me to get into his car.

“I was shaking, too in shock to react,” he said, adding that the man, seeing this, went back into his car and left.

The bodyguard was arrested by a plainclothes policeman who witnessed the incident that occurred between 3.30pm and 4pm.

The 37-year-old man from a private security firm, who has a licence to carry firearms, was released on police bail at about 9pm the same day after his statement was taken.

“The man said he was only doing his job as a personal bodyguard,” he said.

However, police would investigate further and look at the video recording and pictures taken by the public at the scene, he added.

Meanwhile, Chief Minister Datuk Seri Mohd Ali Rustam, who is on a working trip to Rome, urged police to revoke the firearm licence granted to the bodyguard.

“This is a serious matter. The man's actions were unwarranted and excessive,” he said by phone. “I don't think his boss' (Anwar) life was threatened.”