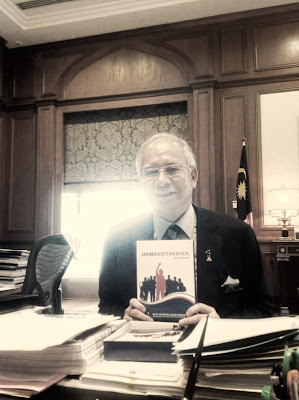 Apart from the kit that contains a booklet, pen, collar pin and stickers, the prime minister’s personal blog is also being filled with video clips explaining Gross National Income (GNI), Foreign Direct Investment (FDI) and Gross Domestic Product (GDP) which have shown an increase since he took office in 2009.

Sources in Najib’s (picture) Barisan Nasional (BN) say some 3.3 million first-time voters will be key to the ruling coalition’s performance in the country’s 13th general election.

“The first-time voters haven’t made up their minds yet and that is why the Internet strategy is important, as shown by Obama in 2008 when he won impressively using the web,” a BN source told The Malaysian Insider.

“After all, these young voters rely on the web for information more than on mainstream media. So we need to reach out to them any which way we can.” he added.

In Najib’s 1 Malaysia blog, the Umno president eschews references to his party or ruling coalition but focuses on first-time voters by asking them to “Take Action Now” by registering to get the action kit.

“This Action Kit contains the basic tools to help you prepare for the coming General Election. A helpful booklet provides simple tips on how to vote for first-time voters and those who wish to refresh their memory, a collar pin, a pen and several stickers,” said the message on the blog.

The kit is emblazoned with a graphic “Jom Bertindak” and silhouettes of people in blue and red with the figure in red appearing to be Najib, and a message below that says “We support Najib Razak”. 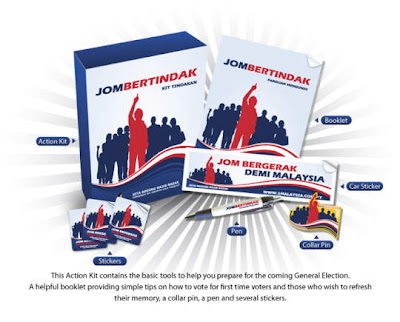 The prime minister’s initiatives have made him more popular than his party and government, with the latest Merdeka Center survey showing his approval ratings are at 61 per cent last month, down from 63 per cent last December.

Both his government and party have been scoring just above 40 per cent approval ratings in similar surveys, reflecting his importance to BN’s efforts to regain its customary two-thirds majority lost in Election 2008.

Najib has said that he will seek his personal mandate after announcing the report card but has yet to dissolve Parliament although the last general election was more than five years ago on March 8, 2008.

He and fellow leaders of BN component parties have finalised their list of candidates for the 222 federal and 505 state seats up for grabs in the coming elections. Sarawak has already had its state elections last year.

BN sources said this week’s Cabinet meeting held on Wednesday was likely to be the last and Najib could dissolve Parliament as early as today or the latest, next Monday.

He is scheduled to end his nationwide Jelajah Janji Ditepati (Promises Fulfilled Tour) tomorrow in his Pekan federal seat where thousands are expected to turn up and cheer him.

The general election is likely to be held by mid-April where 13.3 million voters are eligible to cast their ballots. Both BN and Pakatan Rakyat (PR) have expressed confidence of winning the elections but analysts say the ruling coalition has the edge to keep Putrajaya. -TMI