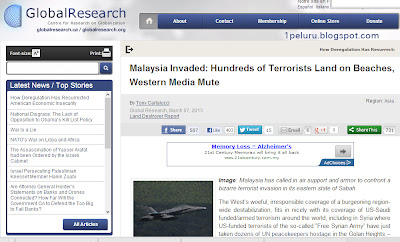 The West’s woeful, irresponsible coverage of a burgeoning region-wide destabilization, fits in nicely with its coverage of US-Saudi funded/armed terrorism around the world, including in Syria where US-funded terrorists of the so-called “Free Syrian Army” have just taken dozens of UN peacekeepers hostage in the Golan Heights – just days after the US announced it would fund the terrorists further, to the tune of $60 million and the West’s Arab partners have just granted the terrorist faction Syria’s seat at the “Arab League.”
Terrorists are US-Saudi Funded Extremists – Part of Engineered Destabilization.
While the West pleads ignorance over the identity of the militants held up in the jungles of Malaysia’s Sabah state, the militant organizations themselves have declared thousands more in reinforcements are being arranged in the Philippines to join and exasperate the conflict. The Free Malaysia Today newspaper reported in its article, “10,000 Tausugs to sail to Sabah,” that :

Thousands of Tausug from Basilan, Sulu and Tawi-Tawi have sailed to Sabah to reinforce members of the so-called royal army of the sultanate of Sulu who are fighting it out with Malaysian security forces, a Moro National Liberation Front official said Tuesday.

The United States suspected a Saudi Arabian ambassador to the Philippines of potential involvement in funding terrorists, according to US diplomatic cables released by WikiLeaks this week.

The report would also state:

Francis Townsend cited Waly’s intervention to secure the release of two members of an Islamic charity detained in the Philippines, the cable showed.
The group was suspected of funnelling funds to Al-Qaeda-linked groups based in the southern Philippines.

The February 24, 2007, US embassy cable named the charity suspected of terror financing in the Philippines as IIRO, which stands for the International Islamic Relief Organisation.
Intelligence agencies have said IIRO was set up by Muhammad Jamal Khalifa, a brother-in-law of Al-Qaeda chief Osama bin Laden.

The report concluded by stating:

Overall, the WikiLeaks cables singled out Saudi Arabia as the key source of funding for radical Islamist groups including Al-Qaeda, the Taliban, Lashkar-e-Taiba and Hamas.

Saudi Arabia is of course is the chief financier of Al Qaeda, and is currently leading efforts to fund, arm, and fill the ranks of Al Qaeda’s franchises from Mali and Libya, to Syria and Iraq. A multitude of reports from across the West have identified Saudi Arabia as the lynch pin in Al Qaeda’s global terror campaign, including the US Army West Point Combating Terrorism Center.
Its reports “Al-Qa’ida’s Foreign Fighters in Iraq” and “Bombers, Bank Accounts and Bleedout: al-Qa’ida’s Road In and Out of Iraq,” identify a vast terrorist network maintained by the Saudis that recruits, arms, and funds terrorists from across the Muslim World, and can funnel a mercenary army into any desired nation. At the time, the desired nation was Iraq. In 2011, it was Libya. Today it is Syria. The same network that US soldiers fought in Iraq is verifiably in use today, in support of US regime-change operations in Syria. 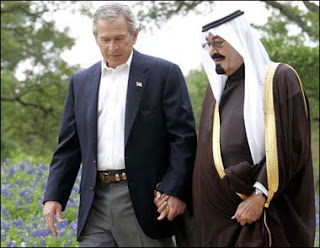 And while it is acknowledged across even the Western mainstream media that Saudi Arabia is a notorious state-sponsor of terrorism, including the terrorists allegedly behind the September 11, 2001 attacks that left 3,000 Americans dead, the US has had a decades-long, deep economic and military relationship with the despotic Arabian autocracy.
The US maintains permanent military bases inside Saudi Arabia, funds the Saudi military, and has recentlyconcluded the largest arms deal in US history with the Saudis. Additionally, Saudi Arabia’s brutally repressive internal security apparatus is a creation of US advisers and operators.
The Saudi royal family and the elite amongst the US corporate-financier Fortune 500, have maintained deep financial and political ties as well. Saudi Arabian corporate-financier interests (run by the royal family) are tied directly to Wall Street and London via conglomerations like the US-Saudi Arabian Business Council and representation upon the JP Morgan International Council (Khalid Al-Falih of Saudi Aramco, amongst the highest valued companies on Earth).
This also includes the Bin Laden family, whose multi-billion dollar Saudi Binladin Group is an active member of the US-Saudi Arabian Business Council and plays a central role in deciding bilateral policy for the benefit of collective US-Saudi corporate-financier and corresponding geopolitical interests. At one point, the Bin Ladens and the Bush family sat around the same table, as both families were involved in the equity firm, Carlyle. In fact, Bush and Bin Laden family members were clicking champagne glasses together in Washington on 9/11, an event that would make both families immensely rich in the coming decade.
It is clear, most acutely in Libya and Syria, that the use of Saudi Arabia’s global Al Qaeda mercenary army serves both Saudi Arabia’s interests as well as Western geopolitical ambitions, including to exact regime change around the world. And it just so happens that the West and Saudi Arabia both seek regime change in currently Russo-Iranian-Chinese friendly Malaysia.
West Attempts to Install Client Regime in Malaysia
The West has been propping up Malaysian opposition candidate Anwar Ibrahim for years.
Anwar Ibrahim, head of Malaysia’s opposition coalition, which includes the Malaysian Islamic Party (PAS), has spent a lifetime in the service of Western interests. Anwar Ibrahim was Chairman of the Development Committee of the World Bank and International Monetary Fund (IMF) in 1998, held lecturing positions at the School of Advanced International Studies at Johns Hopkins University, was a consultant to the World Bank, and a panelist at the Neo-Con lined National Endowment for Democracy’s “Democracy Award” and a panelist at a NED donation ceremony - the very same US organization whose subsidiaries are funding and supporting Bersih, a faux-pro-democracy Western-funded street movement that in fact was created by, and in the service of Anwar Ibrahim’s political ambitions.
Bersih’s street activism fits into a global pattern of Western-backed “color revolutions,” where meddling in sovereign nation’s political processes to install Western-client regimes is disguised as “democracy promotion.”
Anwar Ibrahim’s affiliations with Malaysian “Islamists,” the already active political subversion his US State Department-funded Bersih movement is sowing in Malaysia’s streets, and his Western backers’ habitual support for terrorism internationally as a geopolitical tool, raises the possibility that his opposition movement is complicit in the conveniently timed militant destabilization Malaysia now faces, only months before 2013′s general elections.
This may be why the Western media refuses to properly cover an otherwise very noteworthy conflict. The fact that these militants are emanating from long-time US ally, the Philippines, and the Philippines’ current role in assisting the US “pivot” towards Asia, and more specifically facilitating a proxy confrontation with China, illustrates the greater regional implications at play. The US intends to install client regimes in Myanmar led by Aung San Suu Kyi, Thailand led by Thaksin Shinawatra’s despotic political dynasty, and in Malaysia led by Anwar Ibrahim. Together, this front will then be turned against Chinese interests as part of a long-planned desire to encircle and contain China.
It will be done so under ASEAN and at the cost of Asia’s stability and prosperity.
The future of Asia hangs in the balance, and therefore conflicts like Malaysia’s battle against armed extremists in Sabah may not be covered by the Western press, but it must be covered by the alternative press. The unhinged insanity that is now spilling blood on Malaysia’s shores, also represented by the West’s proxy Anwar Ibrahim and his attempts to provoke street protests against the ruling government, illustrates just how dangerous the current Anglo-American international order is, and how far its reach extends.
We must  identify the corporate-financier interests driving this agenda, – interests we most likely patronize on a daily basis, and both boycott and permanently replace them to erode the unwarranted influence they have used, and will continue to use against people the world over. [sumber] 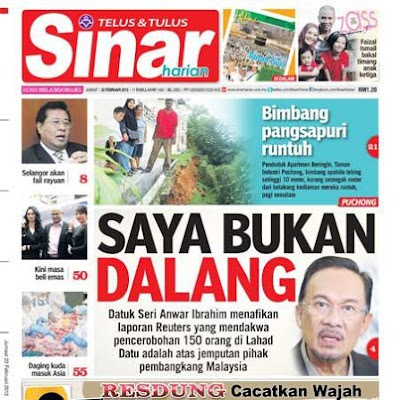