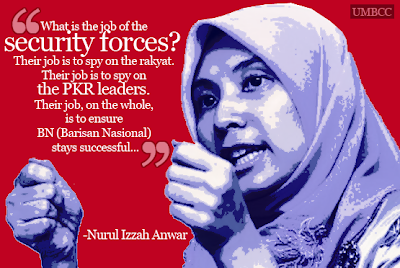 Nurul Izzah Hits Out at Police!


POINTING FINGERS: Lembah Pantai MP claims all the force does is spy on everybody

KUALA PILAH: PARTI Keadilan Rakyat vice-president Nurul Izzah Anwar has claimed that the main duty of the police is solely to spy on all Malaysians.

In her ceramah at Kampung Jemapoh here on Tuesday night, Nurul Izzah said this was why armed intruders had managed to infiltrate Kampung Tanduo, Lahad Datu, on Feb 12.

"Just imagine, 200 terrorists managed to slip into the country and what was the response of the Home Minister (Datuk Seri Hishammuddin Hussein)? His response was to give them drinks, kuih-muih and waited for 23 days before striking."

She also touched on Prime Minister Datuk Seri Najib Razak's move to make the 1Malaysia People's Aid (BR1M) aid an annual affair.
"It is good, we take the RM500," she said.


Former deputy inspector-general of police Tan Sri Shamsuri Arshad hit out at Nurul Izzah, saying that "police are not subject to anybody, politicians and all. We carry out our job in accordance with the law of the land.

"Yes, we do spy, as do other security agencies in the world, such as the FBI (the United States' Federal Bureau of Investigation) and other police forces in the world.

"But the spying or security intelligence we do is to protect the country. The track record shows our successes in protecting the country during the communist insurgency and many other times.

"Thus, our spying is done in accordance with the law, not for political gain. The information gathered is used in preemptive strikes on criminals," he told the New Straits Times yesterday.

Shamsuri said that it was easy to be an armchair critic but harder to be someone like him, who had seen real action during his years in the police force.

"The opposition realises that their voice is not being heard by the people in relation to the Lahad Datu intrusion. So, they are forced to make wild accusations with the hope that the rakyat will believe them.

"I believe that the rakyat knows what is right and wrong this time around. The rakyat know very well that this (intrusion) is a real threat to national security," said Ramlah, who is also Universiti Malaysia Perlis' Malaysian Rulers Institution Research Centre director.

Ramlah said the armed intruders entered Sabah illegally, not because the security forces were weak, but because they received help from locals who were friends and family members.

Nurul Izzah is no stranger to controversy. She came under heavy fire from Muslim scholars at the end of last year for allegedly promoting apostasy among Malay Muslims.

Nurul Izzah, who is also Lembah Pantai member of parliament, was speaking at a forum titled "Islamic state? Which vision? Whose responsibility?" where she emphasised the message of religious freedom, saying that there should be no compulsion in any religion, including Islam. NST